Now This Is Getting Serious

Occasionally, in the past, I’ve used this blog to  share my thoughts in a casual manner about the political climate in Arizona. The kindest term I can think of to described it is ‘toxic’. And, of course, the mid-term election was earlier this month so the climate was even more hostile in the weeks leading up to the election, and more than usually depressing in the weeks that followed. It was only recently, however, that I was confronted with the magnitude of the effect this environment has had upon my psyche. I fear the fundamental chemistry of my brain may have been affected.

A friend updated his profile picture on a major social media platform. 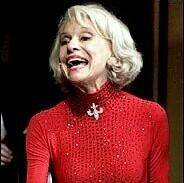 As I scrolled though the updates, what my eyes saw was a photo of legendary stage and screen performer Carol Channing.. What I should have thought was; ‘ Oh you! What a scamp you are for posting a photo of Ms Channing as your profile picture in that camp fashion that can really only be carried off by one of nature’s bachelors’.

What my mind thought I saw, however, was …..

And what I did think was; ‘Why in world would you change your profile picture to photo of Arizona Governor Jan Brewer?!?’

I need to find a support group… immediately.